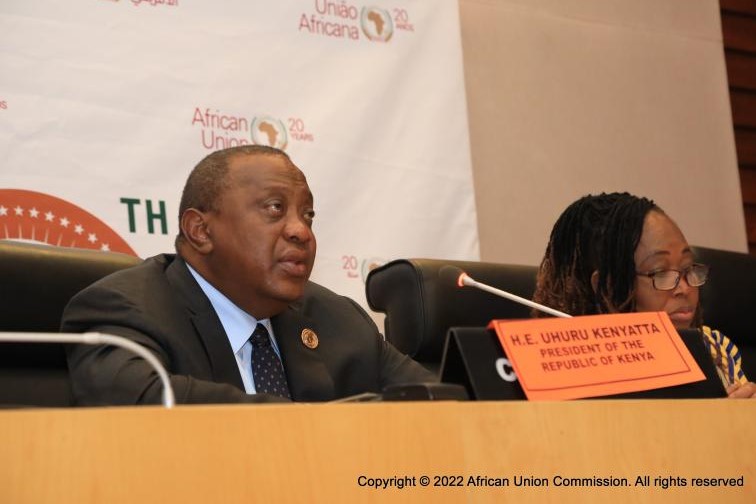 Addis Ababa, 06 February 2022 – His Excellency President Uhuru Kenyatta, Chair of the African Leaders Malaria Alliance (ALMA), Sunday announced the progress made in responding to malaria amidst the COVID-19 public health emergency. The fourth annual Africa Malaria Progress Report highlights the achievements, challenges, and future directions in responding to the disease and the broader health and development agenda. Since the launch of the Zero Malaria Starts with Me Campaign in 2018 by African Presidents, 23 countries have launched the initiative. The public-facing campaign is engaging communities and leaders to take personal responsibility to end malaria.

“Through strong leadership, countries have taken concerted action to ensure that universal mosquito net, indoor residual spraying, and seasonal malaria chemoprevention campaigns have been implemented as planned, as well as efforts to sustain case management including at community level, whilst ensuring COVID-19 guidelines are followed,” said President Kenyatta. “To sustain these key interventions, we must increase domestic resource mobilisation, strengthen partnerships, put communities at the centre and above all ensure that there is shared responsibility and global solidarity including the full replenishment of the Global Fund to Fight AIDS, TB and Malaria” he added.

Over the last two years H. E President Uhuru Kenyatta implemented an ambitious four point agenda that includes digitalisation with an emphasis on the use of country scorecards for accountability and action, establishment of End Malaria Councils and Funds for increased multisectoral action, high level advocacy  and domestic resource mobilisation including from the private sector, increased engagement with Regional Economic Communities and harnessing the demographic dividend of the youthful population through a malaria youth army.

As we now live in the age of pandemics it is critical that the capacity to detect and respond quickly and effectively to disease threats and outbreaks is strengthened.  Malaria is a pathfinder for pandemic preparedness and response.  National malaria programmes are mobilising a cadre of Community Health Workers, the majority of which are females, who are actively playing a key role in sustaining malaria case management, addressing other diseases, and supporting pandemic preparedness and response including through early detection of fevers, and real time surveillance.

The 2021 Africa Malaria Progress Report reveals that 24 countries in Africa have made strides towards establishing national End Malaria Councils and Funds to drive multisectoral support and keep malaria high on the financing and development agenda. EMCs have mobilised millions of US dollars of financial and in-kind support for the fight against malaria in 2021 alone.  The Report shows that progress has also been made on digitalisation including increased use and sharing of national malaria scorecards, enhanced accountability and action. Additionally, a cadre of youth leaders have been mobilised to steer action and build a formidable malaria youth army. Malaria is also being effectively mainstreamed into the agenda of the Regional Economic Communities.

“While the targets in the Catalytic Framework to End AIDS, TB and Eliminate Malaria in Africa by 2030 are bold and ambitious, I am encouraged by the significant progress that is being made. We should continue the big push for new funding initiatives with a focus on domestic financing such as End Malaria Funds and End Malaria Councils, increased roles for the private sector, invest in new innovations and tools and above all maintain the political commitment, shared responsibility and global solidarity’ said Her Excellency Ambassador Minata Samate Cessouma, Commissioner for Health, Humanitarian Affairs & Social Development at the African Union Commission.

Presented during the 35th Ordinary Session of the AU Assembly, the report acknowledges the long-term investments and sustained efforts made by countries, partners and community health workers across Africa towards the fight against malaria.

“The fight against this disease is now at a precarious juncture. But with renewed urgency and increased investment, we can accelerate progress once again, while strengthening countries’ capacity to deal with COVID and future emerging diseases. As we approach the Global Fund’s Seventh Replenishment this year, country leaders must keep malaria high on their agendas and follow through on their commitment to malaria elimination by continuing to prioritize domestic funding, drive regional collaboration and scale up the use of real-time data to drive progress towards a malaria-free Africa. Millions of lives are depending on it.” said Dr. Abdourahmane Diallo, CEO, the RBM Partnership to End Malaria.

Malaria remains a major threat to health and development in Africa. African countries account for 96% of global malaria cases and 98% of global malaria deaths. Africa did not achieve the African Union’s 2020 target of reducing malaria incidence and mortality by 40% (compared to 2015) and is not on track to eliminate malaria in Africa by 2030. Malaria kills a child in Africa every minute.

During the Summit African Heads of State and Government committed to support Global Fund Replenishment advocacy and contribute towards the Fund. Several African countries contributed millions to the Fund during the last replenishment cycle. The Global Fund provides 56% of all international financing for malaria programmes and has invested more than US$14.7 billion in malaria control programmes as of June 2021. It is critical that all players get behind the replenishment to avoid back tracking  on the progress made over decades and ensure that we get back on target to achieve our ambitious targets.