Kadiatou Sanogo – Drawing the line against malaria in ‎Mali 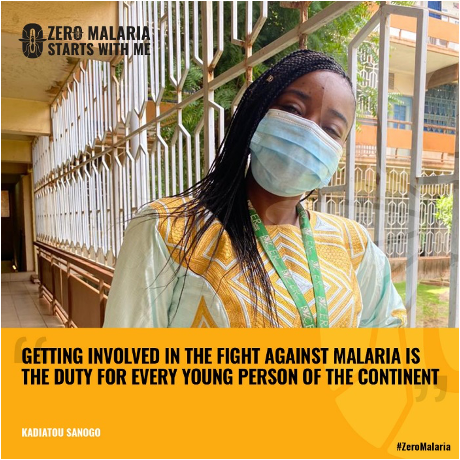 This year Kadiatou has joined Zero Malaria Starts With Me’s new campaign, Draw The Line Against Malaria, to end malaria within a generation, a disease that still takes a child’s life every two minutes. Together, this new movement is making sure no one is left behind.

Kadiatou is uniting with young people from across Africa and globally to unite and fight malaria by driving more action, more innovation, more funding and more political action from our World Leaders.

Malaria is a frightening reality in Mali, where the disease is the leading cause of illness and death. Kadiatou works for Target Malaria, a non-profit research group developing new tools to end malaria.

“Almost every year I get malaria,” she says, “I’ve known it from a young age and it continues.” But while Kadiatou has frequently survived the disease, many aren’t so lucky. In Mali, malaria is the primary cause of morbidity and mortality, particularly among children under five years of age¹.

Kadiatou has seen how lives can be turned upside down due to malaria, having witnessed members of her community struggling to cope — including a friend who lost his daughter, just six years old, to the disease.

“Malaria in Mali is a reality. 100% of the population is susceptible to malaria, so no one is safe.”

Kadiatou has joined the Draw The Line Against Malaria campaign as she believes that the key to ending malaria is igniting passion in young people to help drive political action.

“We young people really need to integrate … make this battle our battle, and together we fight

against this disease,” she says, “It is really necessary that all young people can join this fight.”

“What I wanted to say to the governments of the world is to continue the battle that we have fought, that we are waging now… to always think about how we can completely defeat this disease, and for them to put up the funds needed to win this battle.”

The thought of a world with Zero Malaria gives Kadiatou hope for the future. “Everyone must combine their efforts fighting against this disease, because we must create a better world for the next generation.”

Go to zeromalaria.org today to Draw The Line Against Malaria and declare your support for renewed action to beat malaria in Africa and head towards a malaria-free world.