Q & A Interview: Leadership for Sustainable Health Financing In Africa between Ministers of Finance and Ministers of Health 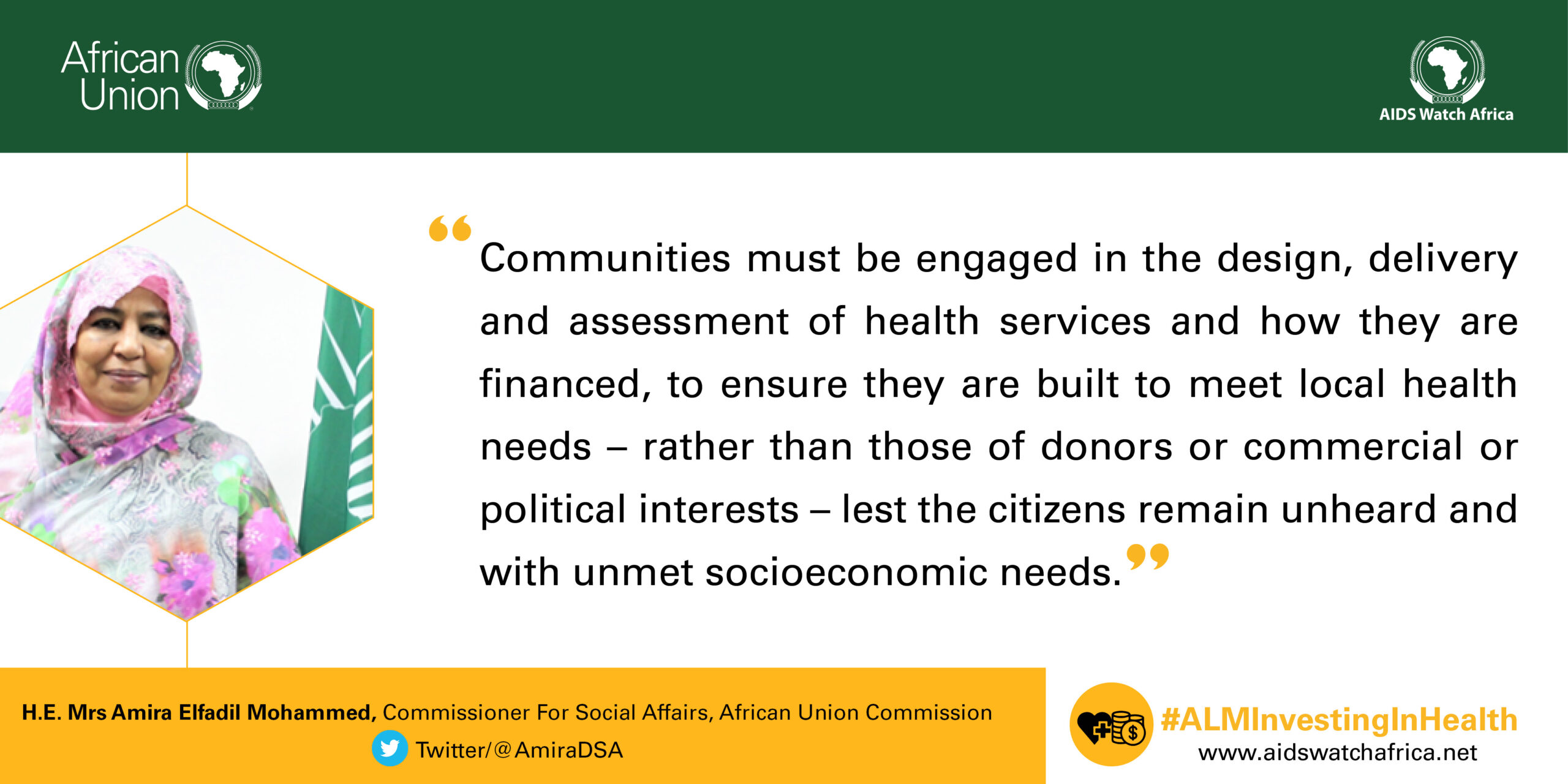 03 November 2020 – Addis Ababa, Ethiopia: The African Union Commission hosted the inaugural AU Africa Leadership Meeting (ALM) of Ministers of Finance and Ministers of Health on 8th and 9th, October. Ministers from AU Member States in the Eastern and Southern Africa Region, respectively, shared experiences and opportunities on how to sustain health gains through country efforts in driving effective and efficient reforms, which seek to mobilize additional resources for health, and improve the value for money in health spending among Member States.

What is the AU Africa Leadership Meeting (ALM)?

The journey to what ALM is today started in February 2019 when H.E. Paul Kagame, President of the Republic of Rwanda – in his capacity at the time as AU Chairperson – convened Heads of States and Governments and health leaders from across the globe to discuss increase of domestic investment in health and improve the efficiency and effectiveness of current health spending. The event, held on the sidelines of the AU Assembly of Heads of State and Government in Addis Ababa, Ethiopia led to the endorsement of the ‘Addis Ababa Commitment toward Shared Responsibility and Global Solidarity for Increased Health Financing Declaration’ otherwise referred to as the ‘ALM Declaration.’

Domestic spending remains the primary source of health financing for AU Member States. Official development assistance (ODA) accounts for more than 20% of total health spending in 22 of 55 African countries (40%) while 37% of Africa’s total health spending is funded by households through out-of-pocket expenditure. Consequently, 110 million Africans suffered from catastrophic health expenditures and 15 million were pushed below the poverty line every year – even before the pandemic. This indicates to us that health financing is a conversation that needs to remain at the top of our minds as policy makers and media, each time ensuring that health matters are prioritized in the list of countries’ budget items. The best table to begin this conversation is where the Ministers of Health and Ministers of Health Finance each have seats and a deep understanding of health financing as the backbone of human capital development and sustainable economic growth.

The AU Africa Leadership Meeting provides a platform to evaluate progress on attainment of the commitments of the ALM Declaration and call decisions on next steps. The commitments are: Increase domestic investment in health; Convene AU Ministers of Finance and Health every two years; Digitise the Africa Scorecard on Domestic Financing for Health; Complement the Scorecard with a domestic health financing ‘Tracker’; Establish Regional Health Financing Hubs in each of Africa’s five regions (based in RECs); Better engage the private sector; Increase the coherence of investment in health; Improve public financial management (PFM) capacity; Enhance national health financing systems; and Improve effectiveness in health spending and health systems.

Do you consider implementation of the ALM Declaration a long-term change in health financing in AU Member States?

Yes, I am confident that it is – if implemented with efficiency and accountable leadership. In 2001, Member States committed to allocate at least 15% of government budget to health with respect to the Abuja Declaration. This was the first instance of intention to prioritise health financing and progress has been made. However, country profiles vary and therefore priorities shift from time to time causing inconsistencies in percentages allocated to sectors, including health. The Commission, therefore, in partnership with stakeholders across various sectors must continue to advocate for health financing paying attention to domestic resource mobilisation and better spending.

Currently, many African governments are responding to the COVID-19 crisis by rapidly increasing spending. This aims to address both the direct health impact of COVID-19 as well as the indirect impact of the economic contraction. As a result, total government expenditures are projected to be 2% higher in 2020 than previously forecasted. The World Bank estimates, on average, that health would need to be reprioritized by an additional 1.4 percentage points in government budgets countries in Member States to maintain trend growth in per capita spending on health.

If Member States can maintain this as a standard going forward, Africa will surely good health and prosperity as envisioned by AU Agenda 2063 and the Africa Health Strategy.

What is the strategy behind encouraging domestic resource mobilisation?

Africa came into the fight against COVID-19, battling the world’s most acute public health threats, with just 1% of global health spending. Despite Africa’s heavy disease burden and its commitments over the past two decades to increase government investment in health, domestic resource mobilisation is moving too slowly to provide access to essential health services, too slowly to cope with the current epidemiological and demographic transitions, too slowly to match Africa’s population growth, and too slowly to build Africa’s human capital.

Africa is rich with resources, at the top of the chain being the continent’s large number of populations. They can provide their expertise and capabilities to support the public health sector, using localized solutions which they understand well as parts of the community. Pursuing prosperity means creating enabling environments for communities to identify the resources around them that can be turned into sources of good health, wealth and prosperity. This calls for innovative thinking and African-led transformation. We are encouraging governments and policy makers in Africa. Some Member States are registering success on this end through improvements in tax administration and other non-tax revenues such as natural resources.

Relying on locally available resources will eliminate dependency on donor funding and fiscal debt and ultimately enhance sustainability. It will also raise the bargaining power of Member States during partnership negotiations as they can demand that efforts of multilateral and bi-lateral partners need to be aligned to the priorities of the continent.

What were the outcomes of the two meetings, and is there more to come?

As we mark eight months since the first case of COVID-19 was announced in Africa, the Member States had several experiences and learnings to share and reflect on. The meeting considered the impact of COVID-19 on African economies and how it affects domestic health financing and discussed solutions to best sustain the health gains in the region within the context of the COVID-19 pandemic. It strongly emerged that money is coming out of other key sectors to support health which should not be the case. All the prerequisites for health should be addressed adequately. The need to maintain access to the equitable provision of essential health services, including via strengthened public health services and health systems, as a path to greater health security at the regional level was echoed.

The background and progress achieved so far in implementation of the ALM Declaration was also presented by the Minister of Health, Rwanda as a representative of the AU Leader for domestic health financing, H.E. President Paul Kagame. In the end, a communiqué with concrete action points towards leadership and collaborative efforts between Ministers of Health and Finance, alongside Regional Economic Communities and development partners was considered. The communiqué is currently under further review by Member States in Eastern and Southern Africa and will be released by the Commission once fully endorsed.

The Commission will also convene Ministers of Health and Ministers of Finance from Central, Northern and Western Africa as follows:

What parting message would you leave to Member States?

I reiterate that we all need to come together and strongly push for the mobilisation of the domestic resources, environment and climate change protection, exploiting natural resources, building strong health systems, productive transformation, diversification and industrialization, infrastructure development, the operationalization of the African Continental Free Trade Area (AfCFTA), leveraging digitalization, and more, in order to ensure inclusive and sustainable development on the continent.

I call for a new mindset and new vision from leaders who believe in Africa’s self-sufficiency and self-control over its own destiny.  I am optimistic that we have leaders in Africa and beyond who understand international dynamics and important strategic issues that are confronting the continent such climate change, energy, digitalization, among others; and passionate about exploiting natural resources and using education as powerful tools for the well-being of Africans.

I encourage all partners and Member States to fully grasp all the lessons learnt during the fight against COVID-19 and use that to fast-track the creation of solutions to pressing challenges affecting our health systems and explore domestic resources available Member States can leverage on existing sustainable health financing mechanisms.